> Olive oil> Nectar of the gods

Nectar of the gods 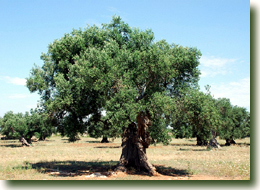 A mysterious link binds man and the olive tree. The Mediterranean soul was thought to dwell in its trunk in ancient times, as if it were a place of the spirit to our civilisation.
Some vegetal patriarchs, veritable living monuments to past and history, survived the passing of time and are still standing. The "witches' olive tree" of Magliano, near Grosseto, and Saturnia's "big one" have been giving fruit for at least two thousand years, together with the "sword tree" of Tivoli, Plato's olive tree in Athens, Ulysses' in Djerba, the Getsemani grove. The olive tree is a unifying cultural feature shared by the peoples of the Mediterranean basin, an every-day presence to all of us for centuries, all the more valued for its healing properties of body and mind alike.

Adam received the olive tree from God, the goddess Athena was given the whole of Attica in exchange for the gift of a new tree to the gods - this is just a sample of the wealth of legends featuring the divine tree. Our mythical plant probably originated from the highlands comprising Armenia, Pamir and Turkestan, later to spread all over the Mediterranean area. It was the first crop Mediterranean populations actually cultivated, as documented by Palestinian records dating back to 4,000 BC. Stone oil-mills made of a concave slab harbouring the olives and a convex one that turned, crushing them, existed as early as 1,000 BC. The oldest remaining one is in the Greek island of Santorini.

Olive trees are frequently referred to in Greek literature, testifying to their relevance in the poetic mind as well as in every-day life. Oil was actually a staple product in the Greek world, being used as emergency sustenance in time of famine, as a remedy for all sorts of body and mind ailments, as fuel for torches and lamps, as a precious cargo to be exported all over the known world. According to Roman chronicler Columella (I century AD) "olive is first among all plants". In fact, being a well-organized people, the Romans developed olive cultivation on an "industrial" scale.

Olive growing thus becomes a specialized segment of Mediterranean agriculture, and the most important source of wealth and export together with the vine. Olive oil was of paramount importance in Roman cuisine, and it was also widely believed to give longevity. In the 7th and 8th century AD olive cultivation is abandoned in favour of more readily productive crops, as olive trees take from 7 to 25 years to reach maturity and give fruit. As the ancient saying goes, "don't plant the olive tree, as it will only benefit your grand-children".

Although it can last a thousand years, the olive tree is not hardy and a severe frost can destroy in one night the work of years - too high a risk for those troubled times. Around 1100 the new feudal system marks the renaissance of olive cultivation. Specialized estates crop up in various parts of Italy, particularly in the centre. During the 16th and 17th centuries most of the country is ravaged by wars, with the exception of Sardinia and Tuscany.

The Dukes of Tuscany are enlightened sovereigns and careful administrators, their reforms encouraging vine and olive cultivation and shaping Tuscan landscape as we see it today. Demand for oil increases dramatically in the 18th century as population grows. In Tuscany this golden period starts with a catastrophe. From 6 to 17 February 1709 a series of severe gales with polar temperatures cause most olive trees to shrivel and die (similar frosts occurred in 1985). This proves a blessing in disguise, as new trees are planted following the recommendations of the new Economical and Agricultural Academy of the Georgofili, the first of its kind in Europe established in 1753. Acknowledging the olive tree as "the most useful for the State", the Academy sponsors a competition centered on the olive tree, "decoration, riches and pleasure of the hillside".

There are no significant modifications in oil making in the following 200 years, although there is a particularly favourable time in the 30s when the Italian government actively promotes olive cultivation all over the country. As we rediscover the importance of helthy eating as opposed to decades of tinned food, olive oil is once again king on our tables, present dietary research confirming what farmers held from Roman times - if you eat olive oil you'll live to be a hundred. Or even longer...